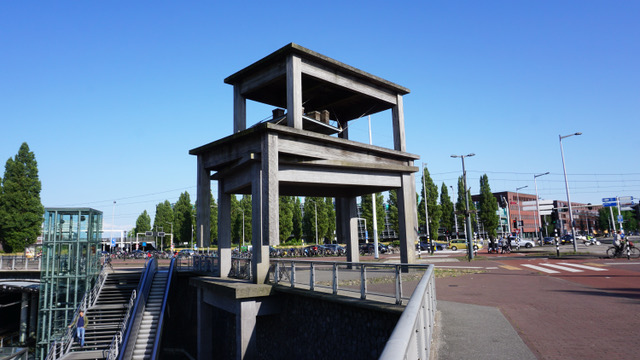 Frank Mandersloot’s For the Bees stands at the busy intersection of the Rietlandpark. It is made up of four tables, though when you go down towards the tram stop it seems to be made of a single table that forms part of the road surface. Even that is not the base, since historic Amsterdam was built on piles driven into the marshy substratum to keep it upright, like a big table.

For the Bees elaborates on this image. Mandersloot’s brief was to make a work of art that refers to the traffic junction on which it stands. The tables clamber over one another towards the cars, bikes, train and tram to evoke the spatiality over the otherwise so down-to-earth surroundings. To reinforce the sense of movement even more, a swarm of thirty thousand bees was housed in the work to add to the traffic flows. Mandersloot also collaborated with the urban ecologist on a landscape plan for flower beds in the vicinity to nourish the bees. The project lasted nine years, built on the piles of Amsterdam and inhabited by a bee population that lived on a surface area of around 28 kilometres – making it one of the biggest works of art in the world.

There was a growing awareness that bees faced the prospect of extinction as a result of short-sighted economic strategies. Bees are kept on various locations in Amsterdam by bee-keepers or in bee hotels that make the city a more insect-friendly place. Mandersloot likewise made the bees a gauge for the residents of Amsterdam. If the bees are alright, so will the people be. Moreover bees contribute billions of euros to our economy by pollinating crucial food supplies and natural commodities.

We live at a time dominated by a strong, almost arrogant belief in the capacity of technology to shape the environment we live in. In the last few years For the Bees demonstrated that nature cannot always be tamed and adapted to what we want. Young bees were blown away in the gusts of wind that blew between the buildings. The colony dwindled until there was nothing left. The bees were gone. Is all well with the city? At any rate, summer 2018 Mandersloot plans to make a new attempt with a bee-keeper to sustain a colony in the work became true.