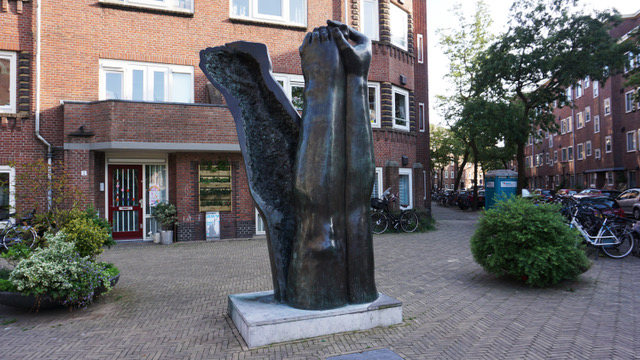 Here on the Krugerplein monuments and honourable mentions are caught up in a symbolic struggle with one another. There is an invisible field of tension between different layers of history and ideology. The square is situated in the Transvaalbuurt. As in many other Dutch cities, it was named after the definitive annexation of the Dutch Transvaal region by the British in South Africa in 1902. The men who are honoured in the streets of the Transvaalbuurt are the ones who fought to keep South Africa in Dutch hands. They and their ancestors, the colonists who settled there after the arrival of the Dutch East India Company (VOC) in the seventeenth century, were the Boers who created the system of apartheid.

In the years before the British victory in the Boer War (1899-1902), the prominent Boer Paul Kruger became fifth president of the South African Republic. As a champion of a Dutch South Africa, he was important for the relation between the Netherlands and South Africa. His name can be found on street names all over the Netherlands. But many regarded him as a coloniser who stood on the wrong side of history, a symbol of the centuries of systematic oppression of Black South Africans.

In the course of the twentieth century, the historical significance of the street names disappeared from the collective memory. It is debatable whether their symbolic function is still harmful. But the Transvaalbuurt reminds us that the criticism of the glorification of the colonial past has itself a long history. The street names were viewed in a new light with the growing awareness of the disgust that apartheid provoked. In 1978 the Pretoriusplein, also named after a Boer, was given the new name Steve Bikoplein. Steve Biko was a Black anti-apartheid activist who had died in the previous year. The anti-apartheid activists Louis Botha and Albert Luthuli also had streets named after them in this neighbourhood. They are examples of successful name changes in which new heroes have been chosen who are more in tune with the present Zeitgeist. They do not change history but are a recognition of a parallel history on which we can draw to reinforce the values of our society.

In the critical mentality of the 1980s there was also a growth in the popularity of counter-monuments: monuments that add positive symbols to the problematic elements in the public space to offer a fuller version of the narrative. Paul Kruger would certainly not have understood the Monument against Apartheid and Racism that Pépé Grégoire made for the square in that way. The monument draws a parallel between apartheid and the persecution of the Jews in the Transvaalbuurt during the Second World War. The placard reads ‘Who among us is more or less’. An arm and a leg are combined in the monument, a reference to the notion of unity in diversity. But their meeting is separated in the middle as a symbol of the damage that can be caused by a readiness to deny this unity. The symbolic opposition in this square shows that there is room in the public space for new, opposing narratives in which we view history afresh through the eyes of today.