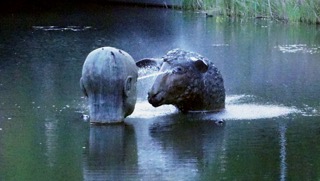 God created the earth, and the Dutch created the Netherlands. It is a common expression to show how much the Dutch landscape has been shaped by the human struggle against water. Here, to the East of the medieval city of Amsterdam, the ground was marshy and the sea posed a permanent threat. The district was regularly flooded when tempestuous storms blew. The city expanded rapidly on all sides in the sixteenth century, but this part was not urbanised until a little later. This was where the city ran up against its natural boundary. Still, Amsterdam was bursting at the seams and needed large docks and more housing. The Dutch East India Company (VOC) set up in the eastern district of what we now call the centre and stimulated an industry through its hunger for sources of energy, land and shipbuilding materials. New forms of making money were developed that are still with us today, such as the sale of shares and an overseas system of production that separated work, social security and purchase price from one another. These new financial devices, the development of technology, and an unending belief in the human capacity to shape its surroundings merged. Amsterdam was no longer afraid of nature; it subordinated nature to its interests.

Merlijn Bolink’s Man en Schaap (Man and Sheep) stand in the water up to his shoulders. It is one of the many works in East Amsterdam that refer to the history of the landscape. Once there was water here, once fish swam here. Now houses have been built on the spot. Jets of water spurt mercilessly from the man’s eyes into the eyes of the sheep. The man looks at the sheep that cannot see anything. Initially Bolink wanted a sculpture of a man and a woman, but from whose eyes was the water supposed to spurt, and who was supposed to be blinded by it? No, the act of looking and being looked at between men and women is a sensitive issue. A question of power. So we see a sheep instead.

The work is about communication. When a person and an animal look into one another’s eyes, they understand one another, Bolink claims. The work is also about lack of communication. We know how people think, but we know nothing about how a sheep experiences things, hence that one-directional gaze. Do we really want to know what the sheep thinks? Or should we then, just as if the work had represented a man and woman, ask ourselves what gives the man the right to blind the sheep?