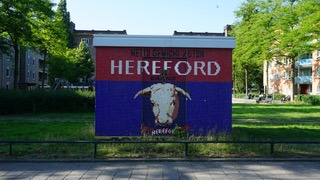 At the end of the nineteenth century Amsterdam changed into a modern city that could be reached by land. Railways were constructed and the docks were moved from the Oostelijke Eilanden, where they had been since the days of the Dutch East India Company (VOC), to the Rietlanden. The days of the windmills to the East of the former docks, which sawed timber for the ships and prevented the IJ from silting up, were numbered. They continued to operate until the end of the nineteenth century, but had now become obstacles to a new expansion of the city. That new urban expansion included a cattle market and an abattoir, a slaughter house, here around the Hildo Kropplein. This is where hides were tanned and where the meat came from that was sold to the butchers in Amsterdam. Before then slaughtering was done privately at a variety of points in the city, but from 1888 this industry was relocated on the outskirts of the city for reasons of hygiene and because of the improved transport by train and boat.

In 1988 the abattoir moved to West Amsterdam and the cattle market with its livestock disappeared completely from the city. The apartment buildings around the Hildo Kropplein were meticulously designed, paying considerable attention to repetition and regularity. The large brick work of art by Per Kirkeby on the square follows the proportions of the surrounding architecture. Kirkeby wanted to keep the memory of the abattoir alive. The architecture of the work recalls that of the large brick slaughter house, and with a bit of imagination you can see the head of a cow in it. Kirkeby particularly wanted to link his native city, Copenhagen, with Amsterdam. Both cities have a long tradition of brick architecture.

The harmony of the square was abruptly disrupted when a huge transformer house was placed there. Residents were seriously annoyed by the way it disturbed the visual axes of the square. In consultation with the neighbourhood council of the local authority, the solution was found in turning the transformer house into a work of art. In 1989 the conceptual artist Carolien Feldbrugge covered it completely with tiles and transformed it into a tin of Hereford corned beef, together with barcode and nett weight – another memory of the former abattoir, although in stark contrast to the sober work of Kirkeby. Feldbrugge must have known that her work was destined to stand there for a long time: she gave the contents an expiry date of 1995.