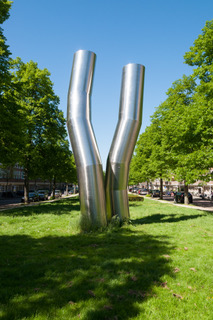 Over the past decades a new awareness seems to have risen of the power residents and other users have in shaping the city. The idea that by using it in specific ways they can actively model public space has led to an increasing number of interventions over the years. The ARTZUID sculpture biennial is a good example. ARTZUID was initiated by a resident of Amsterdam-Zuid who thought the green belts in the middle of the avenues from Berlage’s Plan Zuid were very well suited for the exhibition of artworks.

Public interventions make use of urban space in various ways. How does ARTZUID do that? The city here serves as a background, a stage setting for the arts. Most of the works included in the route were not made for the occasion of the exhibition. But the demarcated green areas are perfect for artworks. The lanes from Plan Zuid were created as meeting places, just like an artwork can grow into a meeting point. In that sense, the scene and the artwork complement one another.

André Volten’s sculpture was installed on Minervalaan for the first edition of ARTZUID in 2009. The artist is considered one of the most influential post-war Dutch sculptors. His job as a welder made him appreciate industrial materials, which as an artist he treated in such a way as to rid them of their functional purpose. For example, these two balancing pipes seem to be moving, but they are not. Abstract art can be hard to grasp since it doesn’t depict reality. Some see this work by Volten as an exception, a remarkable autonomous statement that does survive in public space. The pipes are a stark contrast to the surrounding houses, and a prelude to the high-rise office buildings at Zuidas.

ARTZUID started as a neighbourhood initiative and has since evolved into an event of international allure. Is that a positive or a negative process? The art route extends the international character of the Zuidas into the residential neighbourhood of Zuid. While some resistance was expected, the residents of Minervalaan were very pleased with the sculpture by André Volten. They even planned to set up a special committee to guarantee the artwork would stay where it was because they thought it belonged there so well. The committee was never set up, but the artwork still shines in its place.