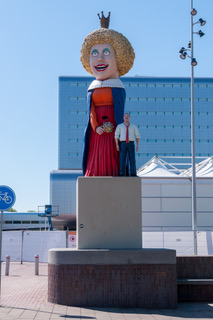 Since a couple of years six colourful sculptures can be seen around Europaplein in front of the enormous RAI Amsterdam. High up on their pedestals, staring off into the distance they rise above the incoming crowd. The three entrances of the square are guarded by two artworks each, among which are two illusionists, two large theatre puppets (and their puppeteers) and two girls on the shoulders of men on stilts. These Feestelijke Beelden(festive sculptures) are the result of a commission by the Dienst Zuidas for a work which would ‘add something special’ to the wall surrounding the RAI area: an artistic solution was sought after for the ornaments on the corners of the entrances. One end of the wall leads to a bridge designed by Piet Kramer, architect and representative of the Amsterdam School. The sculptures needed to reflect the Amsterdam School ideals.

On the pedestals the name of the Belgian artist Guillaume Bijl can be read. About the artworks he says the following: “I was mainly influenced by the rather bare, quite industrial surroundings of the RAI, the stock exchange buildings and the traffic. I wanted to freshen up the area a bit.” The figures are inspired by Flemish folk and street culture. The human figures are life-size and placed on a high pedestal as if on a stage.  This creates a monumental image, a ‘carnivalesque’ welcome to the RAI’s visitors.

For the interpretation of an artwork in public space the immediate environment is of great significance. For people swiftly passing by the Feestelijk Beeldenmay be welcome patches of colour, a sigh of relief within the stark contours of the RAI and the Zuidas. For people pausing there is more to see: the longer you look, the more peculiar the figures appear. Especially the theatre puppets: their proud puppeteers look just like the daily spectators from the neighbouring offices. Both puppeteers are neatly dressed but without their jackets they look like they were plucked straight from their work spaces. Here we see the hint of irony that’s so typical for Bijl’s work. It simultaneously reaffirms the ambiguity of public space: although it may be presented as such, it is never neutral.

Something seemingly marginal such as ‘adding something special’ to a wall in public space becomes the subject of discussion. The wall separates the Zuidas from the residential area. For many visitors of the RAI the sculptures are an introduction to the building, while for the residents they may serve as signposts in a busy street. Although one can always question the intentions of a work of art in public space, the Feestelijke Beeldenindisputably add some necessary colour to the greyness of the RAI suits.