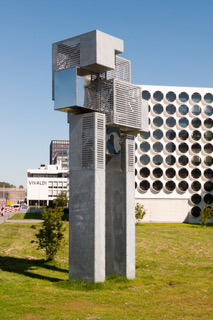 From De Boelelaan it is only a short walk to Antonio Vivaldistraat. That’s where ‘the bodyguard’ of the Integraal Kindcentrum, an elementary school, is located. De Wachter(the watchman, or guard) by Boris Tellegen has been watching over the school here since 2015.The sculpture consists of various cubist forms in three kinds of steel. With its diverse surface structures and angular forms the sculpture blends into the background of surrounding buildings. The high poles on which it stands give it an almost human character: a building with legs.

Boris Tellegen first acquired fame as graffiti artist, going by the alias Delta. For De Wachterhe took inspiration from the high-rise buildings at the Zuidas, but also from children’s toys like Lego and robots. By combining these elements, he tries to give the monumental Zuidas towers surrounding the school a friendlier face, hoping the children will be less overwhelmed by their environment.

Prior to the official opening of the work, an educational project was launched by the school. Classes were organised with and about the artist. To introduce the artwork to them, the children cut and pasted their own adaptations of De Wachter. This practice helped to make the abstract and to them otherwise perhaps unfathomable artwork more accessible. The fact that the sculpture was created especially for the school and the children were involved in it in such an early stage led to their readily embracing the sculpture, and it really has become part of their identity as a school.

Again, it is not easy to identify the audience of a work in public space. By analysing the intentions of the commissioner and the artist, it is possible to find out what kind of audience they envisioned. De Wachterwas made for the users of the elementary school: the children, their parents and the teachers. But in the complex public space the work inhabits other accidental passers-by will also be confronted with it. The only information they have access to comes from the work itself. With its physical aspects (its height, its angular forms, its silver colour) it easily blends in with the office buildings that rise up around it. Executed in steel and in the midst of all the daily construction work, it may look like a temporary building project soon to disappear again. This shows how an artwork in public space can mean something entirely different to each of its various audiences.