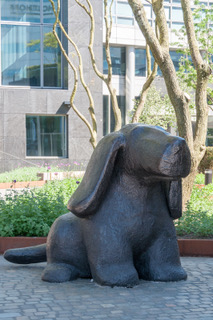 Tom Claassen has quite some experience working in public space. Hildo is one of the dogs he has made. The dogs function differently depending on where they are installed, which immediately shows us an interesting aspect of public space.

A puppy wagging its tail is guaranteed cuteness. What about Hildo the dog, at the entrance of the ABN AMRO offices? The sculpture was acquired in 1997 by the bank’s art foundation. It’s jolly tail, big ears and soft-looking texture make you want to cuddle it or pat it on the head. Hildo is not the first dog Claassen has brought to life. Pontus, the sculpture on Hoofddorpplein in Amsterdam, has become a community favourite and a treasured plaything amongst the children in the neighbourhood. Because of their approachability and seeming simplicity, a first impression of the dog sculptures may be that they’re mere decoration: to cheer up the playground, a flower in a window. But realising this object was made by a professional and popular artist you may want to look again.

It’s hard to imagine public space in the Netherlands without the work of Tom Claassen. A horse in Utrecht, elephants along the highway and a hippo in the water in Amsterdam-Oost: Claassen’s cv is elaborate when it comes down to public artworks. How does the artist deal with the dynamics at play when his commissioners force their will upon him? Through experience the artist has learned how to meet their wishes without discarding his own. Material costs are often contested: creating small size objects helps keep such costs low. Another example is the horse in Utrecht: giving it long legs and thereby claiming the area under its body, Claassen lets the object occupy a lot of space without increasing the costs. Hildo’s small size also significantly saved on material expenses.

Amongst art critics, the opinions concerning Claassen’s animals are divided. Some think of the representation of animals (rather than of human figures) as a way to avoid political engagement: animals are neutral, not as burdened by cultural context as human beings. Animals are likable: choosing to work with animal figures makes it easier not to offend anyone and to keep your audience happy. Others see immense artistic ingenuity in Claassen’s work: to them his animals keep a perfect balance between accessibility and ironic critique. In any case: people don’t mince their words when criticising an artwork occupying a piece of treasured public space, like the entrance of a building you enter daily. This is why art in public space is so vulnerable, much more so than when it is safely contained within the walls of the museum. The audience of such a sculpture is varied and arbitrary: it includes people who don’t care about art or people who are simply not pleased to be confronted with an artwork in that specific place. Is it possible to make something to the liking of everyone? It is not. But A tail-wagging dog offends nobody, so Hildo sits and stays, at the office entrance on Gustav Mahlerplein.

N.B. The sculpture doesn’t officially have a title, but was named humorously after Hildo Krop, the Dutch sculptor, who made many sculptures for Amsterdam’s public space.